Psychologists (and wider society) are becoming increasingly aware that we make political decisions using intuitions – non-conscious gut feelings – rather than through rational debate and consideration of evidence. In this post, I want to outline one influential theory that helps us to explain how and why we do this: moral foundations theory.

Moral foundations theory is a theory put together by American social psychologist Jonathan Haidt and his colleagues, and is built on three core principles. The first is that moral reasoning happens intuitively first, and that verbal reasoning happens second, acting as a justification of your intuitions. Let’s have a look at how this works.

Take a minute to read this story:

Julie and Mark are brother and sister. They are travelling together in France on summer vacation from college. One night they are staying alone in a cabin near the beach. They decide that it would be interesting and fun if they tried making love. At the very least, it would be a new experience for each of them. Julie was already taking birth control pills, but Mark uses a condom too, just to be safe. They both enjoy making love, but they decide never to do it again. They keep that night as a special secret, which makes them feel even closer to each other.

Notice the automatic gut reactions you have to this scenario. Haidt and his colleagues have found that people make fast moral judgements about this, with people being quick to say that what Julie and Mark are doing is wrong. It’s self-evidently wrong because of how the scenario makes you feel, right? However, when pressed for a justification of their judgements, people struggle to come up with reasons. After all, several forms of birth control are used, and the pair seemingly enjoy the experience – even if they do decide to do it just the once! Haidt calls this ‘moral dumbfounding’. This happens when we make intuitive judgements that have few rational justifications. We struggle to explain our judgements, but we don’t feel like we should change them.

The second principle of moral foundations theory is the morality is made up of different foundational constructs, which are on the screen now. These were put together by Jonathan Haidt and Craig Joseph in the mid-2000s, with liberty being added later in 2012. The theoretical basis for these ideas comes from evolutionary psychology and cross-cultural psychology, meaning that these constructs are said to describe universal moral concerns.

Finally, the third principle of moral foundations theory is that the importance of each foundation varies between people, and this produces an individual political approach to the world within in person. 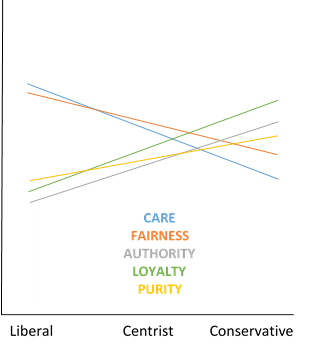 As you can see in the graph above, those who identify as being politically liberal (though they may be better described as leftists in some cases) typically place a higher moral value on care and fairness than the rest of the foundations, while those who identify as being politically conservative more-or-less equally value all of the moral foundations.

So the next time you’re trying to figure out why you think something is immoral and others don’t, just remember – maybe their moral intuitions are calibrated differently to yours. It’s by understanding these differences that we’ll begin to heal the wounds of political polarisation currently eating away at our societies.